Over this father’s day weekend I spent finishing off some of those demolition task I had not previously been able to get to. Removed the front handrail – unsure if I want to put it back on – will decide later. Removed the old toilet and linings and then stripped out the cockpit. Removed the radar, wheel, fish finder and instruments, pulled out the “electrical fuse box” stripped of some of the linings which uncovered more of her original panels. It looks as though I have found where the original upper and lower decks changed – unfortunately it is directly over the where the motor is and will remain – I was planning to have a sliding hatch over the motor for easy removal -I will see what it looks like when I remove the wheel house – which should be by the end of this month. 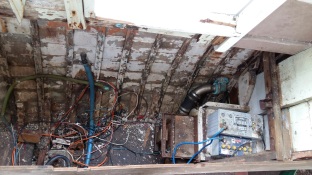 Spent Sunday removing 2 ribs and cleaning the inside of the hull and ribs. Manage to full the green bucket from just 1 of the 5 sections of the boat! Scrapping out the mud and muck using a scrapper as a shovel, the starboard side cleaned up OK with some soapy water after – I expect the section under the motor will be the worst. 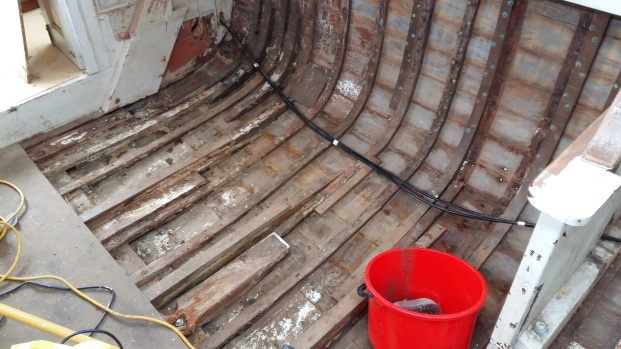